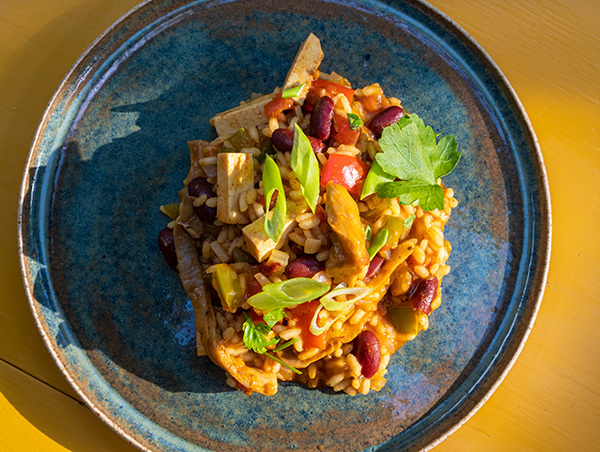 This is by no means a traditional, however tasteful version of jambalaya. This dish has its origin in Louisiana, a southern state in North America. In the eighteenth century, a large group of French-speaking exiles from Canada came to live here, the Acadians. They later became known as the Cajun. Over the past 250 years, the composition of the Cajun population has become tremendously mixed. In addition to people of French ethnicity, it became a melting pot of people of Spanish, Irish, German, native-American, Filipino, and African descent.

Like the people, the culture and cuisine of the Cajun are a colorful blend. New Orleans, the capital of Louisiana, is known for its fantastic music, its extravagant carnival celebrations, and most of all its delicious cuisine. One of the most famous dishes is jambalaya. The preparation of this rice dish finds its roots in French (Provincial) and Spanish cuisine, but the use of spices has a strong American and African influence. Jambalaya is a fantastic culmination with enormous flavor. Our version has been remixed further and is a vegetarian one.

There are quite a few ingredients that go into jambalaya, but it's actually a pretty simple dish. It is very similar in preparation to making paella or risotto. You can alternate with the ingredients, for example by adding corn, carrot, or okra or replacing it with another ingredient.

If everything is to your liking then turn off the heat. Let it stand for a minute and add the pepper and parsley. It is now ready to serve.

Enjoy your meal! Serve with an ice cold beer, and some hotsauce for the heat enthusiast.

* If you don't like spicy food so much, use 1 tbsp cajun spice. To give the dish more flavor you can add 1 tsp oregano, 1 tsp thyme and 1tsp smoked paprika.